Just like its corporal twin, Chevy Equinox, the 2021 GMC Terrain will also receive an update in the next year. The second generation of this compact crossover has been around for a couple of years. It is quite strong in some aspects, but there are also things that should have been done better. Most of them won’t change before a complete redesign, but we count on a couple of nice updates that will keep this model competitive in the following years. At this point, we don’t know the exact details, but it seems pretty obvious that the new 2021 GMC Terrain will come with notable styling updates.

Other than that, it is possible to see a couple of revisions on the inside, while the mechanical aspect of the vehicle is about to remain the same. Given the update, we expect to see 2021 GMC Terrain a little bit earlier than usual, most likely in the third quarter of the next year.

Most of the changes that are about to come in the next year are about styling. The testing model has been spotted on the road and the camouflage obviously shows which areas are about to receive novelties. Naturally, the front end will be in the focus. The camo is pretty heavy, but we can seat that there is a complete LED lighting underneath. We presume that the 2021 GMC Terrain will adopt the brand’s latest design language. This would mean a front face similar to the one on the new Acadia. Of course, that would require a lot of modifications, starting from a new grille, significantly reshaped headlight and a new bumper.

The rear end also wears a camouflage, so we may expect to see some changes in this area as well. At this point, it is hard to tell which ones. Some reports even suggest that the 2021 GMC Terrain won’t feature changes, despite the cover. Still, we believe that a couple of modifications will happen. We should see a couple of revisions to taillights, as well as a few more tweaks to the bumper, exhaust pipes and similar things. Finally, the testing model sports new wheels, while we also expect to see new color options in the offer.

When it comes to interior design, we don’t expect to see significant changes. Simply, the current cabin looks pretty good. The overall impression is that the cabin looks more upscale compared to most rivals. There is a lot of nice materials, though you can find a couple of hard-plastics surfaces as well. Higher trim levels look pretty luxurious.

On the other side, most of the drawbacks simply cannot be fixed before a complete redesign. The current model lacks cargo volume. You can count on 30 cubic feet behind the rear seats, which are subpar ratings for the class. On the other side, we could see a couple of upgrades in terms of sound insulation, as the current model can be a little bit noisy at higher speeds.

Updates in this aspect are always welcome, so we have no doubt that the 2021 GMC Terrain will come with some of them. In terms of tech features, the current model already stands pretty good. It comes standard with a touchscreen interface, smartphone integration and similar things. Still, we count on a better Wi-Fi hotspot, as the current one isn’t particularly great.

On the other side, we saw a big update of safety features this year. Things like forward automatic emergency braking, forward collision warning, lane keep assist, lane departure warning, the following distance indicator, front pedestrian braking, and automatic high-beam headlights have been added to the list of standard features, so we could say that this crossover can finally compete with rivals in this aspect.

When it comes to the powertrain, we expect no changes. A diesel version has been discontinued recently, so the 2021 GMC Terrain will carry on with two familiar gasoline units in the offer. Base models will continue with a 1.5-liter turbo-four, which is good for about 170 horsepower. Although it feels uninspiring most of the time, it is a great choice for a daily ride, especially if we consider pretty good mpg ratings, which go around 26 mpg in the city and 30 mpg on the highway.

An optional 2.0-liter turbo-four won’t cost you much more, although mpg ratings are lower. On the other side, a max output goes up to 250 horsepower, which provides significantly better performances and overall driving experience. Both engines come paired with a 9-speed automatic gearbox.

We expect to see the updated 2021 GMC Terrain sometime in the third half of the next year. We don’t expect bigger changes in price. The current model starts at around 25.000 dollars. 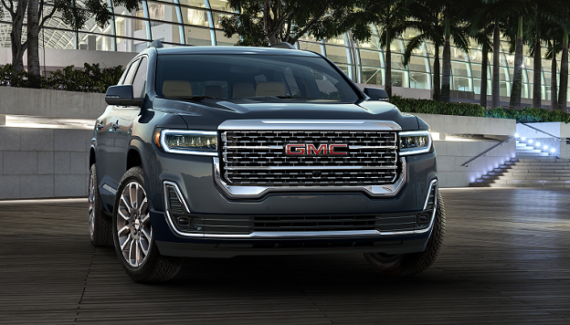